Umpteen times I have typed "I love you," but I couldn't hit the send button. Not because he doesn't love me, but I fear that our love will destroy each other one day like it did one and half years ago. I want to move on from my past; I already have, but the reminiscences never leave me. He, leaving me stranded was the catastrophic event in my life. I know that he has changed, I have changed, things have changed, and we are not in that teenage love. Earlier, our love was numbered. The Number of times we talk about a day, the number of hours we can chat at a stretch, and the number of crazy pictures we exchanged.

The thoughts come unbidden into my mind every time I am with him. I love the way he holds my hand and kisses my forehead in the crowd. He doesn't say it out loud, but I am his princess. After seven years of our relationship, what I feel is that we are meant to be together. Often, I have heard that the people who are intended to be in your life always gravitate back to you even if you leave them to wander far around the whole universe. He says that he can never converse with anybody in a way he does with me. We fight, we love, we tease, and such. Things that people do when they have their souls tied together. Okay, it's not corny if I say that I can write a book on us or may be a series. Am I right? Sometimes words don't matter, but your actions do. Between us, there is no "love you" shared often but our aura proves that we are in love, madly in love.

One day, after a long time we could manage to talk on a call for more than half hours. It was a victory day. Avoiding long time calls is what we have decided beforehand as we hate the fillers "So, tell me more," "oh yeah that's nice," "hmmm," etc. What I imagined being in love is to lose track of time but what I saw is that you count more time when you are in love. Sometimes time doesn't matter, but mostly it does because the evil next day waits for you with a hunter in its hand.

Wish I could marry him and stay with him for the rest of my life. I want to cook food for him, which he will never eat because of its awful taste. What to do, I am a bad cook. Sleeping in his arms is a dream that I want to live every day. Damn the caste system and the list of categories defined in the Constitution of India. They are responsible for killing my happy life. Damn the Hindu holy books from where it all started. I like the Hindu mythology, but certain things irk me. The kind of negative impact people of India has on them. People are ready to curb the happiness of their children and asphyxiate them with the wrong ideology they have towards the holy books. These books show the adverse effects people have on their lives having the wrong perspective. Just like, in Ramayan, Goddess Sita was thrown out of her house because she was kidnapped and was held for ten months. Lord Ram didn't even think that she sacrificed her luxurious royal life for him and suffered for fourteen months in the forests. She was the goddamn princess of a province. What the Ramayan wanted to teach us was that whatever was done to her was not right, and this should never be done to a woman. What did we humans learned from it that we should throw the woman out of our house that is kidnapped, raped or abused? Isn't it? If we go on with the Mahabharatha, it yearned to shout that caste discrimination is a curse. Maharathi Karna was a great warrior of Rajputana family but was not given equal rights because a person of lower rank adopted him. The book shows the adverse effects of such things but what we learn is according to our filthy perspectives. 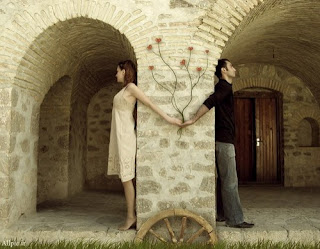 Our relation cries in silence. My pillow knows that it rains every night when my parents discuss a random high caste guy which they saw on that damn matrimonial site. He understands the pain in my heart, and I see him helpless. He checks his desires whenever he wants to kiss me so that the intensity in my heart for his love should stay constricted. He is strong, and I wish the same strength to be a part of his entire life.

Before coming again in a relationship with him, I thought, we can never be the same. And I was right.We are not the same, but we are something more. I am proud of our relationship that will end if one of us gets married, I am proud of him that he hurts himself to keep me happy, and I am proud of us.